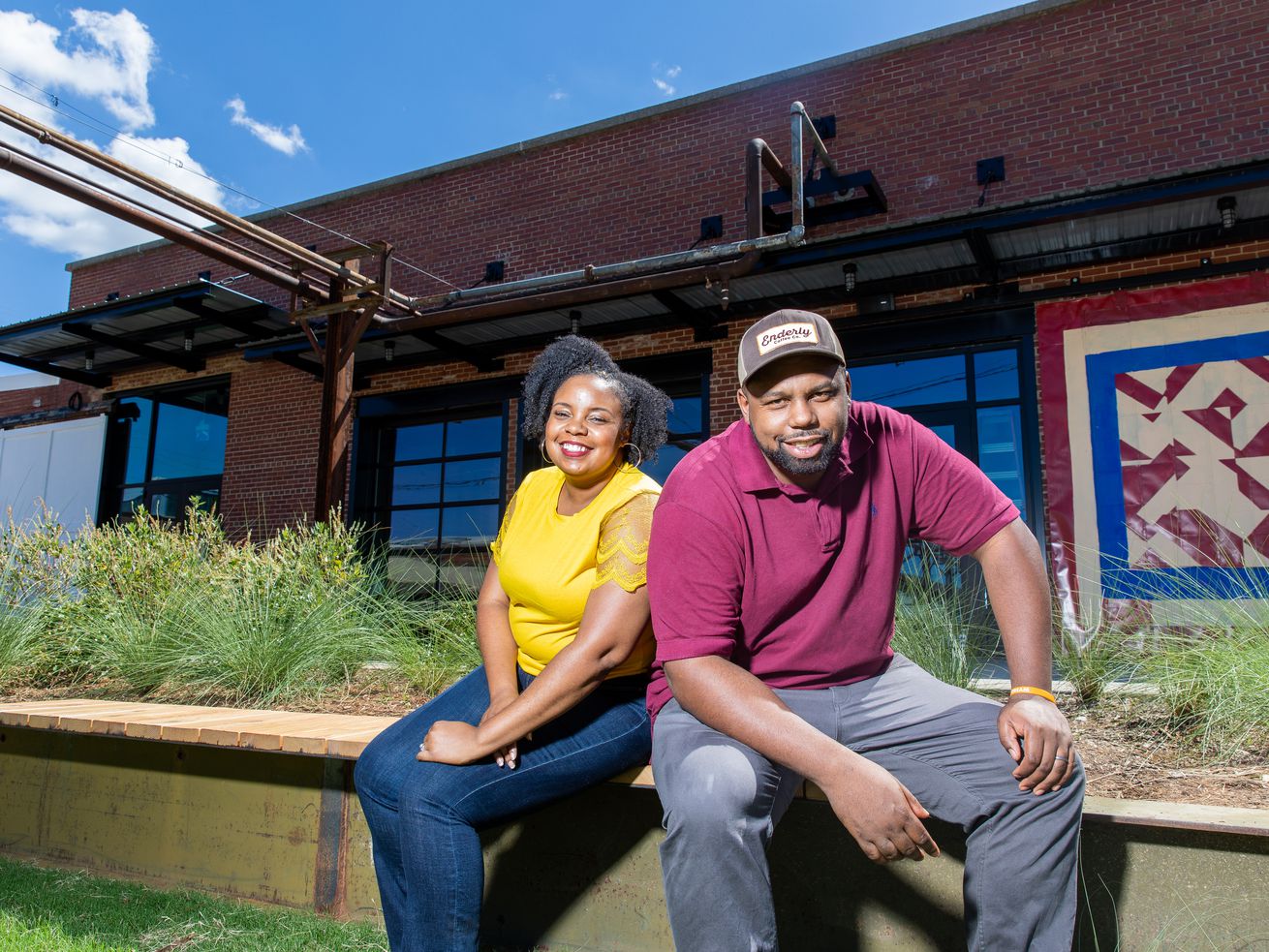 “When people walk into Leah & Louise, they’ll feel like they’re stepping into a blues joint on Beale Street in Memphis.”

Nearly two and a half months after its original opening date — the same day North Carolina Governor Roy Cooper ordered restaurants and bars to shut down as a result of COVID-19 — chef Greg Collier and his wife and business partner, Subrina Collier, were finally able to open Leah & Louise on June 12. The restaurant is named after Greg’s late sister and grandmother, with an emphasis on Memphis-style Southern food. “We have roots in the South via Memphis,” says Greg. “The menu, the atmosphere, the music — it tells the story of our South, our heritage, our hometown. It’s Southern from the Louisiana-to-West-Tennessee perspective rather than the Carolinian perspective, and something truly different for the Charlotte market.”

Leah & Louise is one of the first restaurants to open at Camp North End — a former 76-acre industrial site that used to produce Model Ts and missiles for the U.S. Army, developed by ATCO Properties & Management. The development of the space is set to provide a hub for innovation that connects the community with arts, restaurants, bars and small businesses — a core reason the Colliers chose to open Leah & Louise at Camp North End versus a trendy pocket neighborhood. “I think that’s always been [our] goal — bridging gaps, connecting dots, etc.,” he says. “Camp North End has always been our space and feels like home. It’s in a historically African American neighborhood and that was important to us.”

Camp North End will continue to unveil new restaurants and bars in the coming months. The latest to join the space are La Caseta, a Latin street food-inspired restaurant with pupusas, arepas, empanadas, and tacos al pastor on the menu; Bleu Barn Bistro, a farm-to-table food truck-turned brick and mortar; and Saru by Bow Ramen, the company’s first concept outside of New York City, serving Nagahama-style Tonkotsu ramen.

Leah & Louise pays homage to the juke joint, an establishment known as a place for drinking booze and listening to the blues — and most importantly, acted as a shelter for African Americans in the Deep South post emancipation and into the Jim Crow era. “There are touches of Memphis, the South, the Bible Belt, modern touches, and shotgun houses,” says Subrina. “The bar has tile that looks like corrugated metal and a railroad tie that reminds me of the railroad workers that frequent juke joints after a shift.”

Juke joints historically didn’t have funds for fancy decor and dishware, instead mixing what they had together — Leah & Louise takes a similar approach. “The decor is like modern patchwork, a mix of old and new that creates a beautiful and cohesive experience,” she says. The 1,800-square-foot space, with seating for 58, includes a large community table and 16 patio seats — which will operate at 50 percent occupancy until further notice.

The delay of opening gave Greg time to add in more side dishes; there are now two ongoing family style options on the menu. Currently, find a smoked half-chicken — sourced from a local Black farm — and a whole grilled fish option that changes according to what’s available. Subrina also created Spotify playlists with blues music for people to listen to, as takeout is still a huge portion of their business right now. “Music is part of the cooking process,” Subrina says. “It’s such a big part of the culture.”If guests don’t feel comfortable coming in yet, they can still enjoy the full menu with tunes at home.

The smoked catfish stew with rice grits, field pea relish, and candied pepper is Greg’s personal favorite. “I think it represents all of who I am in one dish,” he says. The bar menu will also be available at Free Range Brewing’s new taproom (coming soon), in addition to the restaurant, so guests can enjoy dishes like hot fried quail and cornmeal brioche with black garlic butter while sipping on local beers.

Mixologist Justin Hazelton is behind the restaurant’s notable beverage program, which will include seasonal cocktails — low ABV and spirit-free drinks included. Specialty cocktails such as the Rubee, with Earl grey and hibiscus-infused Conniption gin, lemon oleo, honey, and rosemary bitters; the Tomboy, featuring rum, a pineapple-cilantro cordial, velvet falernum, tiki bitters, clarified with coconut milk; and a Zodiac Punch that changes ongoing based on zodiac signs, are few highlights from Hazelton.

The Colliers also tapped Tchnavia “Tché” Carter as their sous chef and Jasmine Macon as pastry chef. Leah & Louise will serve as a space for black women and a destination for mentoring and uplifting African Americans in the hospitality industry. In 2019, Greg was a semifinalist for the James Beard Best Chef: Southeast Award — Charlotte’s first Black nominated chef. “The fact we’re saying first Black anything is crazy,” he says. “Our parents tell us these stories — they were going through this when we were kids,” he adds.

The Colliers relocated to Charlotte in 2012, noting that there were many Black people cooking amazing food long before they arrived. “I challenge people to find us and support us, but to find other places, too — think about where you’re going to lunch at,” Greg says. A great salad or seafood dish also exists in West Charlotte, an area of the city made up of historically Black neighborhoods. “It’s important to support Black businesses because that’s how we get more business,” Greg says, further stating that support needs to be consistent — and not just temporary.

“My purpose for creating Leah & Louise was to create a space for everyone,” says Subrina. “There’s not a place in Charlotte where Black people can experience fine dining on the same level as white people that go to certain restaurants or other James Beard nominated restaurants and have the same experience — with people that look like them,” she says. At the restaurant all are welcome and they’ve been drawing a diverse mix of people enjoying a stellar meal.

Greg will continue to host Soul Food Sessions, a non-profit pop-up dinner series dedicated to raising awareness and supporting people of color in the food and beverage industry. In August 2019, the Colliers, alongside food writer Keia Mastrianni and Jennifer Bishop of J. Leigh Events, hosted Charlotte’s first pay-what-you-can Community Feast, raising over $2,000 for Heal Charlotte, at Camp North End. The night inspired several local chefs, including Greg, to highlight a rotating “PWYC” (pay what you can) community dish on his restaurant menu.

Leah & Louise is open Wednesday through Sunday from 5 to 10 p.m. Reservations are required and can be made on Resy. To-go and delivery service will continue to be available through the website at leahandlouise.com.

Dining in a North Carolina Restaurant Now Requires a Mask